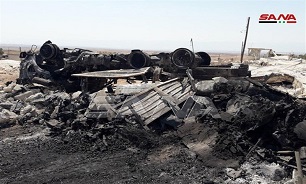 Syrian troops seized a dozen hills and expanded their control of a main highway there, state-run al-Ikhbariya TV said on Friday in a live broadcast from the nearby town of Khan Sheykhoun.

It said much of the area, which includes a few towns and their environs which militants have held for years, was now either under army control or within its firing range.