Precision of Iranian Missiles Improved: General
TEHRAN (defapress) – Iran has improved the accuracy of its missiles, production of some of which has not been made public, a deputy minister said.
News ID: 78441 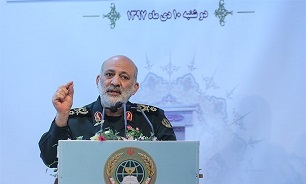 In comments in the city of Mashhad on Friday, Deputy Defense Minister General Qassem Taqizadeh said the accuracy of Iranian missiles have been improved to the extent that they can hit targets with pinpoint accuracy.

Iran has manufactured a series of advanced missiles with pinpoint accuracy that have not been made public, he added.

He said the Islamic Republic is now among the top eight countries with the technology of launching spacecraft, although it started its activities in this field 50 years later than developed countries.

In August, the Defense Ministry unveiled a number of new smart and precision-guided bombs, including the ‘Yaseen’ and ‘Balaban’ guided smart bombs and the newest generation of Qaem-class bomb, an electro-optical guided weapon with pinpoint accuracy.