4 Police Injured in Clashes with Protesters Ahead of G7
TEHRAN (defapress) – Protesters in France clashed with police Friday ahead of this weekend’s G7 summit, leaving four officers injured.
News ID: 78463 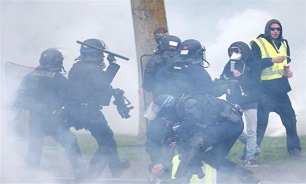 According to French media reports, the anti-G7 demonstrations descended into violence in the village of Urrugne, located 25 kilometers (16 miles) south of the coastal town of Biarritz, where the summit will be held.

Police dispersed the protestors with tear gas, the reports said, and 17 of them were detained. Anti-G7 groups are expected to stage various demonstrations around Biarritz, Anadolu Agency reported.

Leaders of the G7 -- consisting of the US, the UK, Canada, France, Germany, Italy and Japan -- are set to convene for the two-day summit, which will focus on tackling inequality this year.

It is also expected to address economic issues, foreign policy and protection of the environment.

European Council President Donald Tusk will represent the European Union at the event. European Commission President Jean-Claude Juncker will not attend the summit due to health problems, a spokeswoman for the commission announced Monday.

Holding the G7 presidency until the end of 2019, France renewed the format of the G7 summit and invited partner countries including Australia, Chile, India and South Africa to take part in the meeting.