Envoy:
Sanctions Undermining Iran’s Fight Against Narcotics
TEHRAN (defapress)- Iranian Ambassador and Permanent Representative to the International Organizations Kazzem Qaribabadi lashed out at the US for imposing unilateral and illegal sanctions against his country, adding that Washington’s moves are obstructing Tehran’s efforts against transnational organized crimes, such as drug-trafficking.
News ID: 78473 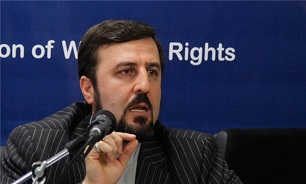 US unilateral and illegal sanctions on Iran have posed major threats to fighting transnational organized crimes such as drug-trafficking, Qaribabadi said, addressing the special joint commission on drugs and crime prevention and criminal justice.

He underlined the importance of international unity and integration based on intelligence analysis and international cooperation to uproot the organized crimes trespassing international borders.

He highlighted emergence of new aspects of organized crimes such as cybercrimes, transnational organized crimes as a major challenge, saying that most important topic to address this issue is adopting a comprehensive approach based on intelligent understanding of its causes.

In this sensitive era that multilateralism has been endangered due to illogical and adventurist policies of a certain government, strong and coordinated international cooperation is necessary under supervision of the United Nations, he said.

Emphasizing the major role of the United Nations Office on Drugs and Crime to address the challenges thoroughly and promptly in line with international cooperation among member states, he said that 14th United Nations Congress on Crime Prevention and Criminal Justice will serve as an important international platform for all members' participation to remove the challenges.

Iran believes that efforts to achieve sustainable development agenda and fighting narcotics are international challenge complementing each other, Qaribabadi said that comprehensive implementation of all commitments put forward by the international community for fighting illicit drugs based on a comprehensive, integrated, balanced and scientific approach will help achieve sustainable development agenda, guaranteeing integration and equality.

Elsewhere in his remarks, Iranian envoy referred to efforts made by Iran to combat narcotics through adopting extensive approaches and policies and minimizing the negative consequences of narcotics consumption.

He stressed the fact that the unilateral choices and illegal sanctions and in its cruelest forms or the "Economic Terrorism" against Iran are the biggest threat to achieve sustainable development agenda in Iran and other neighboring countries.

The issue caused road-block for international cooperation and implementing regional and bilateral initiatives, he said adding that those who imposed sanctions are directly responsible for the disastrous consequences of creating disturbance in fighting narcotics, organized crimes and terrorism.

Last month, Chief of the Iranian Anti-Narcotics Police Brigadier General Masoud Zahedian said that the security forces of his country are single-handedly blocking 70% of the whole volume of drug trafficking in the world.

“Despite unjust sanctions, the Islamic Republic of Iran has managed to take remarkable measures in countering drug trafficking, the results of which are enjoyed by all countries in the world,” Brigadier General Zahedian said, addressing a regional working group meeting on prevention of industrial drug precursors.

“Iran is responsible for over 70 percent of illicit drug busts in the world. In the past seven months, the Iranian police has busted 364 tons of various types of narcotics during operations that left 3,814 of its forces martyred and 12,000 wounded,” he added.

“Production of crystal in Afghanistan is a serious threat,” said Zahedian, adding, “Since its revenues are in the hands of smuggling networks which then inject a part of these revenues into the countries' economies.”

He further maintained that the discovery of tens of tons of drug precursors by Iran’s counter-drug units reveal the extensive scope of the product’s trafficking.