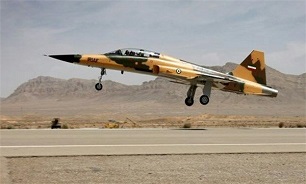 "We will stage drills every year based on the schedule, and the Air Force's wargames will be held in the second half of this (Iranian) year (to end on March 19)," General Nasirzadeh said in Tehran on Sunday.

"Also, every year a number of Kosar fighter jets are manufactured and delivered to the Air Force," he added.

"Experts of the defense ministry's air industries are determined to manufacture a larger number of Kosar fighter jets in the current year and in the minimum period of time possible in full cooperation with the Islamic Republic of Iran Army's air force and support by its Commander Brigadier General Aziz Nasirzadeh," General Hatami said in the Central city of Isfahan after a visit to the site where the Kosar fighter jets are being produced.

General Nasirzadeh, for his part, expressed the hope that new Kosar fighter jets would join the operational fleet of the air force soon.

Addressing the ceremony, General Hatami underlined that the mass-production of the domestically-made fighter jet indicated that sanctions and pressures against Iran were ineffective, describing it as a milestone and a new leap in increasing the combat power of the country's Air Force.

He said that research works would continue on Kosar fighter jet, adding that the country would manufacture more advanced generations of the warplane in the future.

Kosar was unveiled in a ceremony participated by Iranian President Hassan Rouhani in Tehran who ordered the fighter jet to fly.

Kosar can be manufactured in two types of single-cockpits and double-cockpits and the second type can be used for training pilots in addition to enjoying combat capabilities.

"The defense ministry, in cooperation with the Air Force, is mass-producing the fighter jet," General Dadras said.

He added that Kosar had undergone different ground and air operational tests by the Iranian Air Force experts for numerous hours.

"We have ordered this fighter jet for the Army," General Dadras said.