Rouhani Reminds Macron of Iran’s Will to Reduce N. Deal Undertakings
TEHRAN (defapress)- Iranian President Hassan Rouhani, in a phone conversation with French President Emmanuel Macron, underlined that his country will assuredly scale back its commitments under the nuclear deal if Europeans fail to live up to their obligations.
News ID: 78565 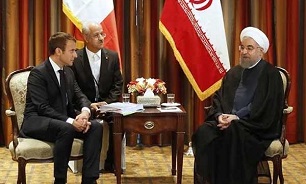 During the Saturday conversation with Macron, Rouhani reiterated Iran’s position on the 2015 nuclear agreement signed between his country and world powers, o0fficially known as the Joint Comprehensive Plan of Action (JCPOA), saying Tehran would continue to scale back its commitments under the deal to force other parties to observe their own obligations.

“If Europe fails to execute its obligations, Iran would take its third step in reducing JCPOA commitments,” Rouhani told his French counterpart, adding that such a move would be reversible like the previous two steps by which Iran both increased its stockpile of enriched uranium and also removed a cap on its enrichment program.

Iran has already reduced its commitments under the JCPOA in two occasions, demanding other parties to the deal to expedite efforts that could enable Iran to benefit from the economic advantages of the agreement.

Rouhani repeated previous statements suggesting that the European parties to the JCPOA, namely France, Britain and Germany, have done little in line with their promises to save the deal from the impacts of the US sanctions.

He criticized the Europeans for not taking any practical steps to live up to their commitments after the US withdrawal from the JCPOA and re-imposition of sanctions on Iran.

Saying that Iran’s approach is to maintain the JCPOA, the Iranian president stressed “fulfilling the commitments by all parties and guaranteeing the security of free shipping in all waterways, including the Persian Gulf and the Strait of Hormuz, are two of Iran's major goals in the ongoing negotiations.”

The Iranian president said the full lifting of all anti-Iran sanctions would lay the ground for future negotiations, stressing that if Europe fails to fulfill its commitments, Iran will implement the third phase of reductions in its commitments to the nuclear deal.

Rouhani also described the JCPOA agreement as unalterable, stressing that all parties must be committed to its content.

Elsewhere, the Iranian president touched upon the issue of Yemen and emphasized a political solution to the crisis with the aim of reaching sustainable peace based on justice in the war-torn country.

He also warned against Israel’s warmongering policies in the region, urging France, as a permanent member of the United Nations Security Council (UNSC), to try to act in accordance with UN resolutions and support the UN Charter.

President Macron, for his part, praised Iran’s commitment to talks on how to resolve a standoff over its nuclear program.

Macron said Zarif’s visit to France, which coincided with a summit of G7 group of industrial nations in the country, showed that Iran was still committed to the principle of diplomacy on its nuclear dossier despite sanctions imposed by the US.

The comments came after Iran said it would be ready for renewed talks on an international nuclear deal which has suffered since the United States withdrew from the agreement in May last year.

However, Iran said after the G7 meeting in France, where US President Donald Trump was also present, that talks would only be possible if the US lifted all of its sanctions on Iran.

Macron, who has sought to mediate between Iran and the US, told Rouhani on Saturday that France would continue its efforts for de-escalation on Iran case, saying that would lead to solutions to regional conflicts, including a war in Yemen.

On Friday, Iranian Ambassador and Permanent Representative to the International Organizations Kazzem Qaribabadi reminded the remaining members of the nuclear deal that Tehran is determined to take the 3rd step in reducing its nuclear commitments.

Addressing the 16th report released by the International Atomic Energy Agency (IAEA) on verification of Iran’s compliance with the nuclear deal, Qaribabadi reiterated Tehran’s stance on reducing commitments under the deal, saying complete obligation to the deal entails full compliance by all parties.

On Thursday night, Iranian Deputy Foreign Minister for Political Affairs Seyed Abbas Araqchi told a state Radio program that efforts made by French President Emmanuel Macron to save the nuclear deal substantiate the failure of the maximum pressure campaign launched by US President Donald Trump against Tehran.

“When Europeans, including France, persuade Trump with their initiative, it means that ‘maximum pressure’ has failed to achieve its aims and there is a division. They should fulfill Iran’s demands because we have said that Iran’s demands in the JCPOA, specifically regarding oil sales and banking ties, should be met for us to return to full implementation of the deal,” Araqchi added.

“What we have proposed to Europeans is to either buy our oil for their companies through obtaining US’ permission or if they cannot do this, provide the Islamic Republic with credit lines in proportion to the same amount of our oil sales. Our return to full JCPOA implementation is impossible without these measures,” he added in the interview.

Pointing to France’s initiative to salvage the deal in G7 summit in Biarritz, he highlighted, “The American side has shown some flexibility in issuing waivers for Iran’s oil sales.”

“This is the very split that has opened up in America’s maximum pressure policy and the very achievement that Iran is obtaining in its maximum resistance policy,” he highlighted

“There will be strenuous and complicated negotiations ahead of us for arriving at a specific formula,” to salvage the JCPOA, the deputy foreign minister added.

The senior diplomat said after US changed its policy about commitments to the JCPOA last year and reached the policy of maximum pressure, Tehran also adopted relative policy to thwart the US attempt to zero Iran oil sale and the US "maximum pressure".

Totally, Iran's foreign policy has been active over the last year since Tehran has taken resistance policy against maximum pressure, Iranian diplomat noted.