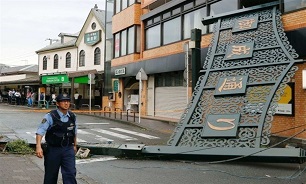 More than 160 flights were canceled and scores of train lines were closed for hours, snarling the morning commute for millions in a greater Tokyo area that has a population of some 36 million, with authorities warning it was dangerous to venture outside.

Typhoon Faxai, a Lao woman’s name, slammed ashore near the city of Chiba shortly before dawn, bringing with it wind gusts of 207 kmh (128 mph) in Chiba, the strongest ever recorded there, national broadcaster NHK said.

A woman in her fifties was confirmed dead after she was found in a Tokyo street and taken to hospital. Footage from a nearby security camera showed she had been smashed against a building by strong winds, national broadcaster NHK reported.

Some minor landslides occurred and a bridge was washed away, while as many as 930,000 houses lost power at one point, NHK said, including the entire city of Kamogawa. But the number of homes without power had dropped to 840,000 by early Monday afternoon, the Ministry of Economy, Trade and Industry said.

The Japan Atomic Energy Agency said in a statement that a cooling tower at its research reactor at Oarai, which has not been in operation since 2006 and is set to be decommissioned, had fallen, but there was no radiation leakage, impact on workers or the surrounding environment, according to Reuters.