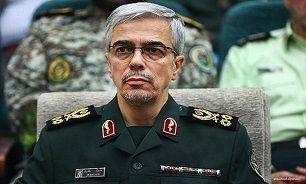 Heading a high-ranking military delegation, Bagheri is making a three-day visit to China upon official invitation of his Chinese counterpart.

During the visit, he will meet and hold talks with senior military and political figures of the East Asian country.

The key objective of the visit is said to be the promotion of defense diplomacy between the two countries.

Establishing a joint military commission, visiting industrial and scientific centers, and giving a speech at the PLA National Defence University are also on the agenda of the Iranian commander in China.