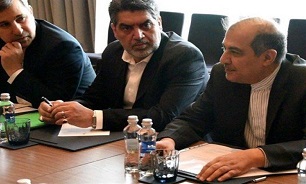 The meeting was attended by Ali Asghar Khaji, a senior assistant to the Iranian Foreign Minister on special political affairs; Alexander Lavrentiev, the Russian president's special envoy for Syria; and Sedat Onal, a deputy Foreign Minister of Turkey, and the delegations accompanying them.

In the gathering, the Iranian, Turkish, and Russian diplomats reviewed and finalized the draft version of the final statement of a meeting of the leaders of the three guarantor states, which is to be held in Ankara on Monday, the Iranian Foreign Ministry’s website reported.

Iran, Russia and Turkey are guarantor countries that brokered a ceasefire in Syria in December 2016, leading to the Astana talks, which are running parallel to the Geneva peace talks.

The leaders of the three countries regularly meet for an assessment of the process which focused on Idlib and adjacent areas - the last stronghold of the rebels - and a political process which awaits the formation of a constitutional committee.

Conflicts erupted in Syria back in 2011, when a small group of opposition forces took up arms against Damascus.

Soon, however, a mix of international terrorists and paid mercenaries mingled with and then largely sidestepped the armed Syrian opposition groups, effectively turning the Arab country into a battlefield for foreign governments opposed to Syrian President Bashar al-Assad.

But the Syrian military, with advisory military help from Iran and Russia, has retaken control of much of the country, and the conflict is generally believed to be winding down.