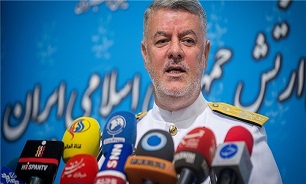 "No one should worry at all about the theatrical and fake coalitions that they form under the pretext of regional security. This region's security is established by the Islamic Republic of Iran and the regional states' naval forces," Rear Admiral Khanzadi said on the sidelines of the Armed Forces' parades in the Southern province of Hormozgan on Sunday.

He added that the foreign forces deployed in the region will leave soon facing the Iranian Armed Forces' power.

Rear Admiral Khanzadi also announced that the Iranian and Omani Naval forces are due to stage joint drills.

The Iranian Armed Forces unveiled for the first time various types of missiles, equipment and air defense systems developed by the country's experts during military parades on Sunday.