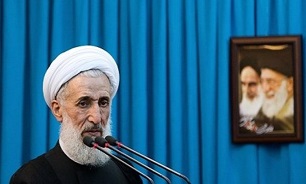 Addressing a large and fervent congregation of the people in Tehran on Friday, Hojjatoleslam Seddiqi said, “Hundreds of kilometers away in Nigeria, Shia Muslims are being continuously cracked down by the Nigerian government. We should pray for Shias in Nigeria for whom void human rights bodies have done nothing.”

He slammed the silence shown by the international bodies on Sheikh Zakzaky’s case.

"I believe that the abject silence of the so-called advocates of human rights exposes their fake nature," Khadijeh Nobari told FNA.

She called on the Nigerian parliament to release Sheikh Zakzaky or account for its silence before the Muslim world's public opinion.

Sheikh Zakzaky, a prominent Shiite leader, has been in detention along with his wife for close to four years despite the deterioration of his health conditions.

Earlier in August, in an exclusive interview with FNA, Dr. Pourrahim Najafabadi, MD, said Sheikh Zakzaky needs to be cured by an experienced medical team of physicians in a specialized multi-specialty hospital outside Nigeria, since there is no such medical center in the African country.

"With the current physical condition of the Sheikh, especially the virulent lead poisoning, Sheikh’s life is seriously at risk by delayed treatment. Meanwhile, there is a need for special medical care even in case of complete medical treatment. There is serious risk to Sheikh’s life if he is kept under detention,” said Najafabadi, the founder and spokesperson of a group of expert physicians who have volunteered to treat Sheikh Zakzaky.

Finally, the Nigerian government allowed Zakzaky to be treated in India but the senior cleric decided to return to Nigeria after being pressured in India.

The Islamic Movement in Nigeria, in an official statement, rejected the claims spread by state-sponsored media about the reason why Zakzaky cut his treatment visit to India short, revealing that the decision was made after it was found that Abuja was planning to murder the cleric in India.

Sheikh Zakzaky was, from the very beginning of his travel to India, bothered and pressed by the hostile decision of the Nigerian government, according to a Friday statement signed by Ibrahim Musa, the President of the Media Forum of the Islamic Movement in Nigeria (IMN).

The movement added in its statement that even upon returning from New Delhi, the top cleric was denied a chance to talk to reporters and journalists who had been waiting for his return at Nnamdi Azikwe International Airport for hours.

The IMN condemned the move, and added that it was intended to prevent Sheikh from revealing some realities about his difficulties in New Delhi, and to pave the way for spreading disinformation against him.

According to the statement, upon arriving in New Delhi, Sheikh Zakzaky and his wife were separated from the doctors who accompanied him from Nigeria and were forcibly taken to a hospital which held no respect for the basic rights of patients.

Even a doctor who had flown from London to New Delhi was not allowed to meet with Sheikh Zakzaky.

It asserted that Nigerian agents’ insistence on not allowing Sheikh Zakzaky to meet with his doctors reassured the cleric and his wife that Abuja was planning to kill him in the Indian hospital with the help of their connections and operatives in the place.