Army Cmdr:
Saudis’ remarks result from their failure in Yemen
TEHRAN (defapress) – The remarks of the Saudi officials shows their desperateness and are compensation for their recent failures, Commander of Iran’s Army Major General Seyyed Abdolrahim Mousavi said on Thursday.
News ID: 78827 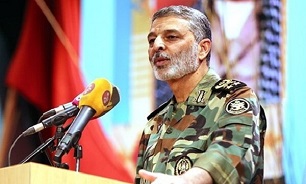 “Saudis have suffered crushing defeats against Yemenis and are out of their breath now,” he said.

“Yemen, the country which has been the target of a huge number of attacks in the past five years and has not been allowed to import even a matchstick, has carried serious attacks against Saudi Arabia.

Yemen’s Ansarullah movement and their allies in the Yemeni army deployed as many as 10 drones to bomb Abqaiq and Khurais oil facilities run by the Saudi state-owned oil company Aramco last Saturday (September 14).

Saudi and US officials, including Secretary of State Mike Pompeo, were quick to blame Iran for the attack without providing any evidence, The claim drew ridicule from many social media users who compared Pompeo’s rushed conclusion to Washington’s indecision about the murder of prominent journalist Jamal Khashoggi at the Saudi consulate in Istanbul in October 2018.

Tehran has vehemently rejected accusations of involvement in the raids as "lies" and warned of "an all-out war" in the event of military strikes against the country.