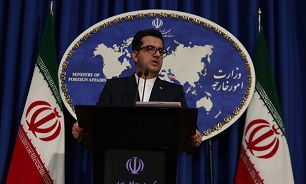 “The Islamic Republic of Iran condemns these meddling remarks by foreign powers and security bodies about the internal affairs of other countries and the Persian Gulf region, and is of the opinion that any interference in the region's security arrangements by outsiders would in itself cause and exacerbate insecurity and tension in the region,” Mousavi told reporters on Wednesday.

The remarks came in reaction to NATO Secretary General Jens Stoltenberg, who recently said in an interview that “NATO allies are extremely worried about Iran’s destabilizing activities in the region.”

“Instead of interfering in regional affairs, the NATO Secretary General would better take responsibility for the destructive impacts of the intervention of this military organization in the Middle East and West Asia, which has resulted in nothing but the killing of civilians, strengthening of terrorism, increasing the production of illicit drugs, as well as devastation and escalation of insecurity in the region,” Mousavi added.

The spokesman further stressed Iran’s position that the security of the Middle East must be provided by regional countries themselves without the presence of foreign troops, adding “The Islamic Republic of Iran, like any other independent country in the world, reserves the right to enjoy conventional defense programs; as such, our missile program is of a defensive and deterrent nature, and expressions of unnecessary concerns will not affect our country's policy in preserving and developing our missile defense.”