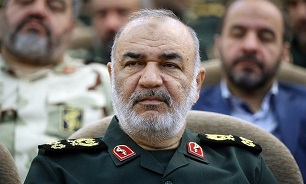 “We do not allow the enemy’s will to affect our destiny and so far, we have done so and are moving forward,” Major General Salami told Tasnim in the northwestern province of Ardabil.

Iran is now defeating its enemy and this trend will continue, the top commander added.

“The secret to these (military) advances is that God is the ruler of the world and not America, and that anyone who believes in God is not affected by the enemy’s will,” Major General Salami stated.