Middle East A Safer Place without US: Iranian Security Official
TEHRAN (defapress) – Secretary of Iran’s Supreme National Security Council highlighted the failure of all American plans for West Asia, saying even the US’ regional allies have arrived at the conclusion that the Middle Eats would be a safer place without the US.
News ID: 78967 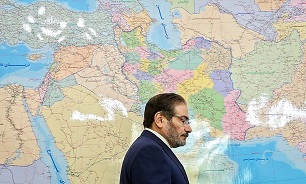 In an article published on Monday, Ali Shamkhani said three open admissions from top US officials in the past two months have laid bare a series of facts to which the American authorities had not dared to confess before.

After the Yemeni Ansarullah Movement’s attacks on Saudi Arabia’s Aramco oil facilities and the kingdom’s push for a response, the US officials explicitly rejected Riyadh’s call and made it clear that it was Saudi Arabia being attacked, not the US, Shamkhani added.

He also noted that the US’ successive political and military defeats in the region forced the American authorities to admit to the failure of military presence in the Middle East which has cost Washington eight trillion dollars.

As Turkey recently began a military operation in northern Syria, the US left its Kurdish allies alone, admitted that it had waged a bloody war in Iraq under the false pretext of weapons of mass destruction, and acknowledged that military involvement in the Middle East was the worst decision ever made in the history of the US, Shamkhani added.

The US government appears to have come to the conclusion that the equation of power and politics in the Middle East has changed, and that the US can no more claim to be a dominant power in the international order, the Iranian official stressed, saying Washington has now two options: either to pretend to be a superpower by incurring huge expenses, or to adopt a realistic policy, accept the realities and save itself from the costs of the exposed plot.

The defeat of the strategic US projects has become clear to the world, projects such as the disintegration of the Middle East, the Deal of Century, regime change in Iran, making Saudi Arabia the region’s top power, the war on Yemen, peace in Afghanistan, or the crisis in Syria, Shamkhani added.

The US government’s admission of defeat has made many West Asian countries, even those that once paved the way for the US military presence and hosted the American forces, acknowledge that “the Middle East is a safer place without the US,” he concluded.