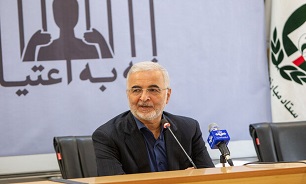 Underlining the role of Iran, regarding first, its adjacency with Afghanistan that produces 90 percent of narcotics in the world and second, its strategic location that makes it a gateway for east Asia to European countries in fighting against narcotics and terrorism, Momeni said “just during the past recent 10 days, Iranian police has seized eight tons of narcotics at western Iranian borders which were supposed to be smuggled to western countries.”

The Iranian official expressed readiness for transfer of knowledge and experience to Slovakia in this sector.

In a Tuesday meeting with Jean-Luc Lemahieu, UNODC Director of Policy Analysis and Public Affairs in Vienna, Momeni warned that the increase in production of crystal methamphetamine in Afghanistan from 200 tons per annum to its present 9,000 tons per year rings the alarm bell for the international community and will harm regional as well as western countries.

“Some ten tons of the seized drugs in the said time were crystal meth, registering 600 percent increase compared to the same period in the preceding year.”

Lamenting about the unjust US sanctions against Iran, Momeni said “unfortunately, the sanctions have a negative impact on Iran’s efforts in fighting narcotics.”

He urged the international community to take required measures about the US sanctions on Iran.

In this meeting, the two sides signed an MOU on establishing a regional center for capacity building and conducting investigations to promote drug rehabilitation quality and to improve public immunity and health.

Momeni arrived in Vienna on October 12 to meet and talk with senior UN officials including the Executive Director of the United Nations Office on Drugs and Crime, the Austrian Police Chief, the Slovak Police Chief, and some other senior Austrian drugs officials.

Despite high economic and human costs, the Islamic Republic has been actively fighting drug-trafficking over the past four decades. The country has spent more than $700 million on sealing its borders and preventing the transit of narcotics destined for European, Arab and Central Asian countries. The war on drug trade originating from Afghanistan has claimed the lives of nearly 4,000 Iranian police officers over the past four decades.

According to reports, in 2018 alone, Iranian forces carried out 1,557 operations against drug traffickers, seizing approximately 807 tons of different types of narcotic drugs and psychotropic substances.

According to the latest World Drug Report of the United Nations Office on Drugs and Crime, in 2017, Iran had seized the largest quantity of opiates, accounting for 39% of the global total.