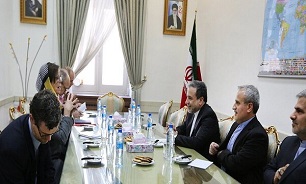 Araghchi said in the meeting that "the Islamic Republic of Iran has tried to keep the door for engagement and diplomacy open despite the US withdrawal from the JCPOA and re-imposing sanctions as part of its maximum pressure campaign against Tehran, while unfortunately Europe only announces political support and refuses to pay the price to keep the nuclear agreement alive."

The Iranian diplomat added that Iran has adopted a maximum and active resistance approach against the US maximum pressure, stressing that unilaterally sticking to implementing to the nuclear deal is not acceptable to Iran anymore.

He added that Iran is determined to continue reductions in JCPOA commitments, calling on Europe to adopt a more constructive approach and regain Iran's trust.

Söder, for her part, expressed appreciation to Iran for releasing the Sweden-owned oil tanker Stena Impero.

She also stated that Sweden along with other European countries will continue their efforts to preserve Iran nuclear deal (JCPOA).