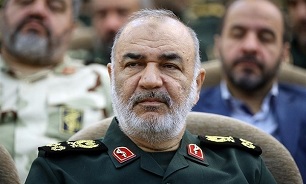 Speaking to reporters while attending a ceremony to mark Arbaeen in the northern city of Shahr-e-Rey in Tehran Province on Saturday, Major General Salami said, “Arbaeen is a day when all the huge rivers of divine love and affection move toward Imam Hussein (AS).”

He further hailed the Iraqis’ measures to serve Iranian pilgrims visiting the Arab country during Arbaeen and said, “The Iraqi people have shown their utmost kindness, love and hospitality, and we thank every single one of them.”

The commander also referred to the unity and solidarity between Iran and Iraq and said, “We are siding with the Iraqi brothers, and the warmth that the enthusiasts for Imam Hussein (AS) have created will melt the global arrogance (the US).”