Iran Calls for Further Expansion of Tehran-Baku-Moscow Cooperation
TEHRAN (defapress)- Iranian President Hassan Rouhani, in a meeting with his Azeri counterpart Ilham Aliyev in Baku, described bilateral ties between his country and Azerbaijan at a satisfactory level, and called for expansion of relations in a trio with Moscow.
News ID: 79078 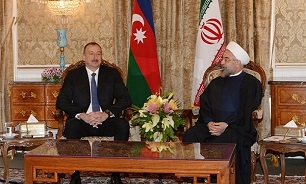 “Tehran, Baku and Moscow should further expand their trilateral and joint cooperation,” said President Rouhani, highlighting the importance of enhanced ties between Iran, Azerbaijan and Russia, in a meeting with Aliyev in Baku, where the Iranian president is to take part in the summit of the Non-Aligned Movement (NAM).

He said the Islamic Republic is ready to boost its relations with the neighboring Republic of Azerbaijan in the Caspian Sea region, noting that the two courtiers’ ties currently stand at a satisfactory level.

Describing the Caspian Sea as “the sea of development, peace and friendship,” Rouhani said, “Iran is always ready to develop maritime cooperation with Azerbaijan in the Caspian basin with regard to exploration [of undersea resources] and [protection of] environment.”

He added that the Iranian government and nation have always stood by the Azeri nation and government at international forums, noting that the two countries together could help promote regional and global peace and security.

Rouhani said the development of ties and joint cooperation between Tehran and Baku would serve both countries as well as the region.

Aliyev, for his part, hailed a 70 percent growth in the volume of trade transactions between Tehran and Baku and said the two nations’ cooperation in the areas of energy, banking, industry, and transportation within the framework of their joint economic commission is well progressing.

The Azeri president added that good progress has been made in construction activities for the International North-South Transport Corridor (INSTC), which links the Indian Ocean and the Persian Gulf via Iran to Russia and North Europe.

Aliyev further voiced his country's willingness to enhance cooperation with the Islamic Republic in all areas, calling for Iran's contribution to Azerbaijan's power plant construction, transportation, and oil exploration projects.

On Tuesday, Iran's Ambassador to Azerbaijan Javad Jahangirzadeh announced that executive works to set up a joint industrial township will kick off by Tehran and Baku in the near future.

“Construction of the industrial township is to set up processing industry for agricultural products and producing industrial outputs in order to export them to the two countries and other regional states,” Jahangirzadeh said, addressing a meeting of 60-member delegation of Iran-Azerbaijan Joint Chamber of Commerce in Baku.

The Iranian ambassador said that the embassy in Azerbaijan is ready to offer guidance for Iranian businessmen to develop economic cooperation with the Republic of Azerbaijan.

Jahangirzadeh hoped that Tehran-Baku commercial relations would hit $600 million a year in the near future.

In a relevant development earlier in October, Azerbaijani Ambassador to Tehran Bunyad Huseynov said that his country is interested in further expanding commercial and economic ties with Iran, the lauded the significant 74% growth in the volume of bilateral trade.

In a meeting with Chairman of Tabriz Chamber of Commerce Younes Jael, Huseynov pointed to cultural and trade capacities of Iran and Azerbaijan, and expressed hope that trade between the two countries would increase further.

Noting that the presidents of the two countries have met 12 times in recent years to enhance bilateral relations, the envoy said that both governments have taken effective steps to expand relations, and it is time for the Azeri and Iranian private sector to work together.

Economic cooperation of Iran and Azerbaijan in the private sector should be utilized for the development of relations, Huseynov added.

Jael, for his part in the meeting, said that the economic and commercial capacities of East Azerbaijan province is high, calling for cooperation and synergy of the economic activists of the two countries to exercise a successful and effective presence in third markets.

He called for the creation of preferential tariffs and dispatch of economic and trade delegations to carry out joint venture investment projects as effective measures to expand economic cooperation.

The provincial official also called for successful and effective presence and cooperation of the Iranian and Azeri economic activists in third country as well.

Early in July, Senior lawmakers from Iran and Azerbaijan, in a meeting in the Azerbaijani capital city of Baku, vowed to broaden parliamentary ties between the two neighboring states.

During the meeting, Asgarov described diplomatic shuttles between the two countries' officials as significant to promoting Baku-Tehran relations.

Noting that the two countries' ties are based on strong legal foundations, he added, "Agreements signed by the two neighboring and friend countries in various fields have given an impetus to mutual cooperation."

"Azerbaijan Republic attaches special significance to ties with neighboring states, Iran in particular, and parliamentary relations play a crucial role in this respect," he said.

According to him, interaction and regular parliamentary meetings between Iran and Azerbaijan have had significant part in strengthening parliamentary relations.

Tajgardoun, for his part, said that historic, cultural and religious bonds between the two nations require that bilateral ties never be strained.

Describing Baku-Tehran bilateral ties as strategic, he said, "We are interested to further improve relations."

Iran's parliamentary delegation arrived in Azerbaijan on Wednesday on a two-day official visit to the country.

In June, Iranian Foreign Minister Mohammad Javad Zarif said that Tehran is in talks with a number of other states, including Azerbaijan, to establish bilateral monetary channels in a bid to bypass Washington’s unilateral sanctions.

Speaking at the opening ceremony of the Azerbaijani-Iranian bus and truck production plant in Azerbaijan's Hajigabul Industrial Park on April 19, Mustafayev said that expansion of bilateral ties can benefit both sides in different economic sectors.

Speaking about joint projects, Mustafayev pointed to the car plant, jointly owned by an Iranian and an Azerbaijani company, which is successfully operating in the Neftchala Industrial Park.

More than 1,000 cars were produced and sold last year, he said.

He added that as part of the visit by Minister of Industry, Mine and Trade of Iran Reza Rahmani to Azerbaijan, meetings are held where issues in the fields of industry and trade are discussed.