Rouhani:
Iran, Pakistan Resolved to Implement MoUs
TEHRAN (defapress)- Iranian President Hassan Rouhani said that in a meeting with his Pakistani counterpart Arif-ur-Rehman Alvi the two sides have vowed to implement the memoranda of understanding (MoUs) they had signed over the past years.
News ID: 79081 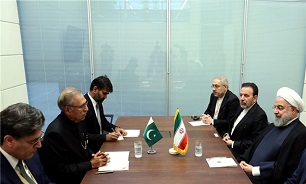 “Iran and Pakistan have good potentials to develop their cooperation and Iran has made the development of cooperation with the countries of the region, including Pakistan, especially in the economic and trade spheres, a top priority in its policies,” President Rouhani said after his meeting with President Alvi.

In a relevant development earlier on Friday, the Pakistani president in a meeting with President Rouhani said that the Pakistani people have deep and long-standing relations with the Iranian people.

“We value and appreciate the Iranians’ resistance to obstacles and difficulties as they have overcome crises and challenges and can certainly overcome problems afterwards,” President Alvi added on the sidelines of the 18th Summit of the Heads of State and Government of the Non-Aligned Movement (NAM).

The 18th Summit of the Heads of State and Government of the NAM with the participation of the heads of 60 countries, including President Rouhani, kicked off in Baku, Azerbaijan on Friday.

The NAM is a forum of 120 developing world states that are not formally aligned with or against any major power bloc. After the United Nations, it is the largest grouping of states worldwide.

At the NAM Baku Summit, the Republic of Azerbaijan will take over the chairmanship of the Non-Aligned Movement for the next 3 years.