Iraqi PM Says People Are Free to Exercise Right to Demonstrate
TEHRAN (defapress) – Iraqi Prime Minister Adel Abdul Mahdi said on Thursday people would be free to exercise their right to demonstrate at imminent anti-government protests, but warned violence would not be tolerated.
News ID: 79084 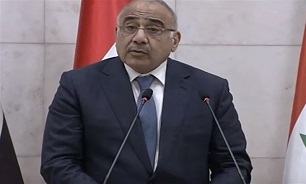 Protesters had begun to gather in public squares in Baghdad and southern provinces as Abdul Mahdi made his televised address, ahead of officially sanctioned protests on Friday.

Abdul Mahdi stressed in Thursday’s address that a government collapse would drag Iraq into further turmoil.

“The resignation of the government today without a constitutional alternative, will lead the country into chaos,” he said.

He reiterated reforms announced in the aftermath of the protests, including a cabinet reshuffle, job opportunities for unemployed youth and the establishment of a new court to try corrupt officials.

The premier also announced that government salaries, including for top officials, would be gradually halved, with funds redirected to a social security fund for the country’s poorest.

Abdul-Mahdi has struggled to address discontent since the violent unrest erupted in Baghdad earlier this month and spread to southern cities.

The new wave of the protests are expected to attract large numbers of people after an endorsement by cleric Muqtada al-Sadr, whose coalition won the largest number of seats in Iraq's parliamentary elections last year.

Iraq’s top cleric Grand Ayatollah Ali al-Sistani has also called on Baghdad to probe the deaths in the previous round of unrest and address people's demands.