Speaker:
Iranian, Iraqi Nations Enjoying Closer Bonds to US’ Dismay
TEHRAN (defapress)- Iranian Parliament Speaker Ali Larijani said much to Washington’s chagrin and its malevolent intention to harm the close bonds between the nations of Iran and Iraq, the people of the two countries are even more intimate now after the successful Arbaeen march of this year.
News ID: 79088 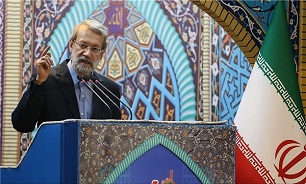 Addressing a meeting of members of Qom Popular Headquarters of Arbaeen on Friday, Larijani noted that Americans are seeking to harm solidarity between the Iranian and Iraqi nations, and added, "The hearts of the two nations are intertwined and their historical common ground is a great capacity and that's for the same reason, the enemies are seeking to sow discord between them."

he hailed the Iraqi services they offered to the pilgrims, specially those from other countries.

Noting that the Americans are seeking to harm solidarity between the Iranian and Iraqi nations, he said, "The hearts of the two nations are intertwined and their historical common ground is a great capacity and that's for the same reason, the enemies are seeking to sow discord between them."

The Iranian nation stood by the Iraqi people in difficult situation of the ISIS terrorist invasion on Iraq, he said, noting that the ISIL dealt blows to the Iraqi nation but Iran helped to break up the terrorist group.

Arbaeen is an example of convergence between the two nations, Larijani said, noting that members of the Qom Arbaeen Headquarters have not been ordered to serve the pilgrims; rather it is the Islamic solidarity that prompted them to help Muslims to perform the ritual in peace of mind.

Iraqi people also share the same insight, as they set up makeshift tents on the way to holy sites to render services to the pilgrims, the speaker said.

The enemies have always been monitoring the Islamic insight, as they are seeking to create problems in a bid to destroy the great capacity, he said.

Late on Tuesday, Iranian President Hassan Rouhani lauded coordination and cooperation between the Iranian and Iraqi officials to hold Arbaeen procession in the best possible manner, and said, “Iraqi officials and people were kind and hospitable towards pilgrims of Imam Hossein (PBUH).”

President Rouhani noted that while the enemies are trying to show the region insecure and unstable, “we witness a multimillion rally in the most secure and peaceful conditions”.

Arbaeen has turned out to be a social and popular media to convey the message of freedom-seeking and standing against cruelty,” he added.

On Monday, Iranian Ambassador to Baghdad Iraj Masjedi appreciated the Iraqi government and nation for hosting his country’s Arbaeen pilgrims.

“I feel obliged to sincerely thank the honorable, pious nation of Iraq and the respectable government of the friendly and brotherly country of Iraq for a warm welcome that they gave to millions of Iranian pilgrims who created an epic event,” Masjedi said.

The Iranian ambassador said that Arbaeen will forge better brotherhood and friendship between the Muslim nations.

Nearly 18 million people, including over 3 million Iranians, visited Iraq during the past days to mark Arbaeen, the fortieth day of martyrdom of Imam Hossein (PBUH), grandson of Islam’s Prophet Mohammad (PBUH).