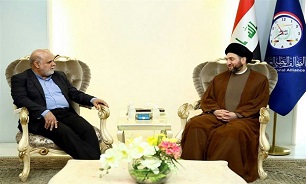 Speaking at the meeting in Baghdad, Hakim underlined the importance of the Iraqi administration’s accountability to the legitimate demands of the Arab country’s people, including public services and employment.

The Iraqi politician also pointed to the regional situation and said all nations’ interests hinge upon efforts to promote peace and dialogue.

He further stressed the need to keep the Middle East away from any conflict that would undermine the security of the region, the world and the interests of the nations.

During the session, the two officials also discussed the latest efforts to boost bilateral relations between Tehran and Baghdad.

At the start of October, street protests erupted in several Iraqi cities over unemployment and poor public services. The demonstrations resumed on Friday after a pause of about two weeks.

The first round of the protests left over 150 people dead in Iraq, according to the Interior Ministry.

The demonstrators want the government to take meaningful action aimed at ending the country’s economic woes and fighting corruption in state institutions.

As part of efforts to satisfy the protesters’ demands, Iraq’s parliament on Monday passed a set of measures, including reduced salaries for officials, the formation of a committee tasked with drafting constitutional amendments within four months, and the dissolution of all provincial and local councils outside the semi-autonomous Kurdistan Region.