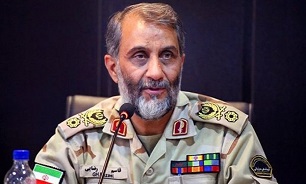 "We do not have any security concern at the borders as a result of cooperation and companionship of the people," General Rezayee said in a meeting in the Northwestern province of West Azarbaijan on Wednesday.

"At present, we enjoy good superiority at the country's borders due to the measures that we have adopted, including targeted inspections which are among our main plans," he added.

The Iranian police, border guards and the IRGC are actively engaged in security operations against anti-Iran terrorist groups.

Commander of the Islamic Revolution Guards Corps Ground Force Brigadier General Mohammad Pakpour announced late last month that the IRGC forces had engaged in over 50 clashes with the terrorists at the Iranian borders and killed tens of militants since late March.

"Over 50 cases of attack have happened in the past 6 months which have led to clashes and considerable tolls have been inflicted on the terrorists' operational teams at the Northwestern and Southeastern borders of Iran," General Pakpour told FNA.

He also added that several Takfiri and terrorist teams in the Western borders of Iran have been dismantled completely by the IRGC Ground Forces and tens of terrorists have been killed in the past three years.

General Pakpour underlined that security and tranquility prevails at the Iranian borders despite all moves made by the terrorist groups due to the intelligence superiority and preparedness of the IRGC Ground Force's units.