Pakistani Minister Stresses Cooperation with Iran for Regional Peace
TEHRAN (defapress)- Pakistani Minister of State for States and Frontier Regions Shehryar Khan Afridi underscored the need for Tehran and Islamabad to increase cooperation to establish peace and help the development of the regional states.
News ID: 79145 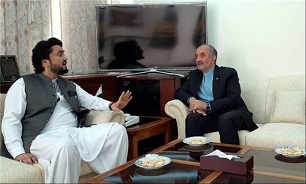 Afridi made the remarks in a meeting with Iranian Ambassador to Pakistan Mehdi Honardoust in Islamabad on Thursday.

He also said that Pakistan and Iran will collectively fight the menace of drugs.

Honardoust, for his part, said that Iran will always stand shoulder to shoulder with Pakistan, adding that Iran values Pakistan Prime Minister Imran Khan's efforts for regional peace and unity among the Islamic states.

He said both countries will also cooperate for regional peace and development.

In relevant remarks in April, Imran Khan in a meeting with Honardoust said that Islamabad was enthusiastic about having closer relations with Tehran.

Imran Khan said that his country attaches great importance to its ties with Iran.

“Pakistan attaches great significance to its neighbors, especially the Islamic Republic of Iran, which shares many interests and commonalities with Pakistan,” the prime minister said.