Iran:
US Unilateral Sanctions Blatant Violation of Int’l Law
TEHRAN (defapress)- Iranian First Vice-President Eshaq Jahangiri said on Saturday that the US bullying and “unjust” sanctions against his nation represents a textbook example of economic terrorism and a flagrant breach of the principles of the international law and the United Nations’ charter.
News ID: 79169 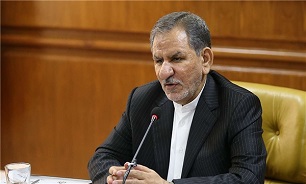 Addressing the 18th meeting of the Council of Heads of Government of Member States of the Shanghai Cooperation Organization (SCO) in the Uzbek capital city of Tashkent today, Jahangiri held the international community accountable to take action against the US imposition of “unjust” sanctions against the Iranian nation.

He underlined that “the US bullying and unilateral sanctions” constitute a clear example of economic terrorism and a blatant violation of the principles of the international law and the charter of the UN.

On Thursday, Iran's Judiciary Chief Seyed Ebrahim Rayeesi lashed out at Washington for pursuing a seditious policy in the Middle East, saying that the US is implicated in all miseries and crimes in the region.

Upon arrival in Tashkent on Wednesday, Jahangiri had stressed the need for strengthening cooperation among regional organizations against the US’ unilateral policies.

Last Tuesday, Iranian Foreign Minister Mohammad Javad Zarif lashed out at Washington for obstructing any initiative for forming an alliance of multiple countries pursuing common goals, warning that the US is seriously endangering multilateralism in the world.

Speaking to reporters upon arrival at Heydar Aliyev International Airport in the Azerbaijani capital city of Baku, Zarif said the main objective of the Non-Aligned Movement (NAM) is to boost multilateralism, emphasizing that the ministerial meeting of the organization and following summit of the heads of state will mainly focus on such an ideal.

“It is necessary for world countries to base their relations upon diplomacy and multilateralism. The 18th NAM summit preceded by the foreign ministerial meeting will also provide an opportunity for the high-ranking officials to hold talks on the sidelines of the events,” the top Iranian diplomat noted.

A day earlier, Zarif had criticized some Western countries for applying unilateral policies against other nations, reminding that world issues will have no solutions unless they are addressed collectively.

He highlighted the crucial role multilateralism plays in today's world, saying the human community will not be able to survive unless it addresses world issues collectively.

He stressed that Iran has always been steadfast in multilateralism since the world needs to collectively address the issues at the international arena.

The imposition of the will of a single power over all other nations is an existential threat for everyone, he added.

Early in October, Iranian President Hassan Rouhani said Washington’s unilateral policies have damaged international trade and prosperity, and called upon the world to undertake a serious measure against the US’ destructive approach.

“We believe that the international community must confront the US’s hostile and unilateralist approach by taking a firm decision and effective measures,” President Rouhani said in an address to a summit of the Eurasian Economic Union (EAEU) in the Armenian capital city of Yerevan.

Rouhani emphasized that the world order is based on multilateralism and joint cooperation among all members of the international community, and that all countries are duty-bound to counter unilateralism in order to maintain global peace, security and stability.

The Iranian president said the US has, in recent years, pursued unilateral approaches and jeopardized mutual and international agreements, including the 2015 nuclear deal on the Iranian nuclear program, officially known as the Joint Comprehensive Plan of Action (JCPOA).

“Unfortunately, as a result of the US destructive measures, we are witnessing many problems in economic relations among countries, increasing poverty, insecurity and immigration as well as a decline in economic development in the world,” Rouhani said, warning that the continuation of such policies would lead to irreparable damage.

He stressed the importance of strengthening multilateral and regional economic cooperation in line with multilateralism in the international system.