Leader receives students in Tehran ahead of US embassy takeover anniv.
TEHRAN (defapress) – Leader of the Islamic Revolution Ayatollah Seyyed Ali Khamenei has received a large number of students this morning on the eve of the 1979 takeover of the US embassy in Tehran.
News ID: 79181 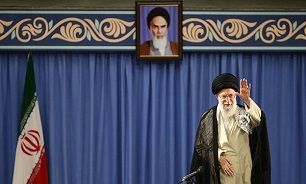 Ayatollah Khamenei addressed thousands of students on Sunday morning, a day before the 40th anniversary of the 1979 takeover of the US embassy in Tehran, which is marked every year with nationwide rallies.

On November 4, 1979, a group of Iranian university students took over the US embassy in Tehran, which they believed had turned into a center of espionage aimed at overthrowing the Islamic Republic.

The day, which falls on the 13th day of the Iranian calendar month of Aban, is also known as the Student Day and the National Day of the Fight against Global Arrogance.