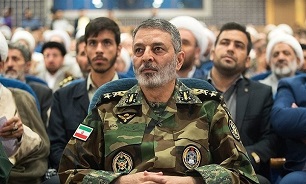 In an address to a Monday ceremony in Tehran, held to mark the 40th anniversary of takeover of the US embassy, Major General Mousavi said Iran’s policy of active resistance has forced the arrogant powers to change their behavior and calculations.

Their reasonable officials have realized that the “era of pressures with a zero cost has ended,” the commander said, adding, “Iran has the necessary facilities, determination and consensus to respond to pressures.”

Enumerating the US government’s hostile measures against Iran, the top general said the Islamic resistance and the battle against arrogance have inflicted defeats on the US, which he said is rapidly heading towards downfall under President Donald Trump.

The Army commander also highlighted Iran’s leading role and influence in West Asia, saying the concept of resistance has been promoted across the entire region and turned into an effective model for countering the hegemony.

In comments in November 2018, Leader of the Islamic Revolution Ayatollah Seyed Ali Khamenei highlighted the diminishing influence of the US government in all areas of power, saying Washington has even discredited “liberal democracy” which is known as the basis of Western civilization.

There is a consensus among major international experts that the US power is dwindling in all areas, the Leader underscored, adding that, conversely, the Iranian nation is moving forward and has a bright future.