Rouhani:
Iran open to talks but not to bowing to pressures
TEHRAN (defapress) – President Hassan Rouhani said Sunday that the Islamic Republic is open to talks with the world, however, it will never bow to any pressure.
News ID: 79246 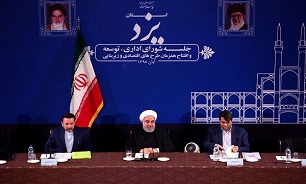 “We are in contact with the world; we are looking to solve the problems, but we will never bow to any humiliation,” Rouhani said in meeting with the senior officials of the central province of Yazd on Sunday evening.

“Wherever we can solve people’s problems through talks and interaction with the world, I, as your elected president, won’t spare a second, although I know it’s hard,” he added.

Rouhani stressed that his government will continue the efforts to address the current challenges with a special focus on maintaining the Iranian nation’s dignity and unity.

“We need to stay united and use national wealth well and be kind to each other to be able to overcome the problems,” he added, calling on people to preserve their national unity.

Earlier in the day, during a public address in the central Iranian city, the president said the country is currently at a very critical juncture, adding, “The people of Iran are united against the enemies’ pressures, and despite what the United States and the Iranian nation’s enemies are doing, this nation is readier than any other time for defending its country.”