Amir-Abdollahian:
Continued resistance against aggressors key to solve Yemen crisis
TEHRAN (defapress) – A senior Iranian parliamentary official hailed the Yemeni nation’s resistance against the aggressors, saying such great spirit has left no choice for the invaders but to think of ways to stop their hostility in the war-torn country.
News ID: 79267 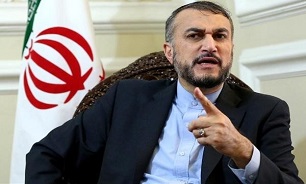 “The resistance and faith of the Yemeni people have made the aggressors seek a political solution for the current quagmire they have created [in that country],” Parliament Speaker’s Special Aide for International Affairs Hossein Amir-Abdollahian said in a meeting with Yemen's new Ambassador to Tehran Ibrahim Mohammad Mohammad al-Deilami Tuesday.

The Iranian official referred to the fiendish plots of the US and the Zionist regime on partitioning the regional countries, stressing that “Tehran will always back Yemen’s territorial integrity and unity.”

The Yemeni envoy, for his part, expressed gratitude to the Islamic Republic for its continued support to his country against the arrogant powers, saying “We will never stop our efforts till we meet the Yemeni people’s needs.”