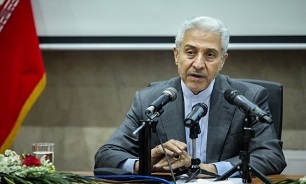 He made the remarks on Fri. in his meeting with the Director General of the United Nations Educational, Scientific and Cultural Organization (UNESCO) Audrey Azoulay on Thursday, on the sidelines of a UNSECO meeting in Paris.

While describing Iran’s salient achievements in the scientific and academic fields, the science minister emphasized that Iran is ready to exchange experiences with UNESCO in relevant issues.

He pointed to the significance of UNESCO activities in scientific, educational and cultural fields in the global level and stated, “given the scientific and cultural achievements of the country in recent decades, Islamic Republic of Iran is ready to promote the level of regional and international cooperation in relevant issues.”

For her part, Director General of the United Nations Educational, Scientific and Cultural Organization (UNESCO) Audrey Azoulay pointed to the brilliant history of the Islamic Republic of Iran in the areas of civilization, science and culture and called for taking advantage of all existing capacities for the promotion of bilateral ties.

She termed Iran’s progress in the scientific and technical fields as an opportunity for the promotion of Iran’s relations with UNESCO and named Iran as one of the active and influential members of this international scientific body.