Pro-Palestinian Protesters Rally against Israeli Visitors at Canada’s York University
TEHRAN (defapress) – Dozens of pro-Palestinian students held an anti-Israeli protest inside the Toronto's York University campus, as former Israeli soldiers were set to visit the university and speak to students on their experiences in the army.
News ID: 79314 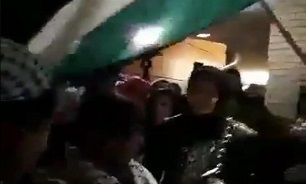 Members of York’s Students Against Israeli Apartheid (SAIA) arrived at the university on Wednesday to protest against a school-sanctioned panel discussion with Reservists on Duty, an organization of former members of the Israeli Force.

The activists were seen waving Palestinian flags and chanting slogans.

Toronto Police and private security agents were deployed on the spot to keep control of the situation, TorontoSun reported.

Calls to protest the arrival of the members of Israeli forces came from across the Internet, including the federal NDP candidate for York Simcoe, Jess McLean, who on Twitter denounced York for hosting the event and urged her followers to attend Wednesday’s SAIA counter-protest.

A Toronto Police spokesman said that at least one person was injured, but no charges were laid.