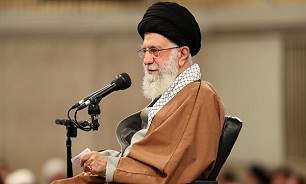 He made the remarks on Wednesday in a meeting with thousands of Basij volunteer forces on the occasion of Basij Week.

Ayatollah Khamenei described people’s rallies in condemnation of violence during recent days across the country as a ‘magnificent move’ adding, “the Iranian nation proved once again how powerful it is.”

Enemies had spent a considerable sum of money to organize this ‘very deep extended plot’ and thought that they could use the issue of gasoline as an opportunity “but this move was foiled by the people.”

Following the revision of gasoline price in the country last week, peaceful protests erupted in a number of cities which turned violent in some occasions, inflicting damages to public property. Meanwhile, Iranian people came to streets during recent days to condemn the violent actions of hooligans and voice support for the Establishment.

“Police, Basij, and IRGC entered the field and carried out their duties in a tough encounter but the move done by the Iranian nation during this week is above and more important than anything else,” said the Leader.

“That main enemy, i.e. the Global Arrogance, that are sitting behind monitors, understand the people’s move. They received a slap in the face and are forced to withdraw.”

"The system of domination is against freedom. The biggest freedom is a nation’s freedom and independence, which they are against. They enter via colonialism, then via Neocolonialism, today using new methods, soft war, and if they can and find it necessary using military force without hesitation."

This item is being updated…