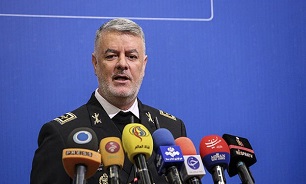 “In the near future, we will conduct a joint wargame with naval forces of China and Russia in the country’s southern waters in the vicinity of the northern Indian Ocean,” Rear Admiral Hossein Khanzadi said at a press conference on Wednesday.

He added that the preliminary planning for the wargame was done last month and the forces were currently getting prepared for staging the drill.

“After this wargame, there will be one with the naval forces of the Indian Ocean littoral states, which will be held within the framework of the Indian Ocean Naval Symposium (IONS), in a bid to promote convergence among the navies and achieve security in this region through collective contributions from all forces situated there,” he added.

Elsewhere, Khanzadi said that the Iranian Navy would join ‘Dena’ destroyer to its southern armada sometime in the Iranian month of Bahman, which falls on 21 January 2020 to 19 February.

Khanzadi had previously announced that Dena would be joining the fleet deployed to the country’s southern waters.

He had also said on Sunday that two destroyers, namely Dena and Damavand, were being equipped by vertical launch systems (VLS), which are used for holding and firing missiles on mobile naval platforms, such as surface ships and submarines.

Khanzadi also revealed plans for the manufacturing of a new class of heavy destroyers, under a project dubbed Negin [gemstone], which would weigh over 5,000 tons in a bid to bolster the country’s defense might in the naval missions.