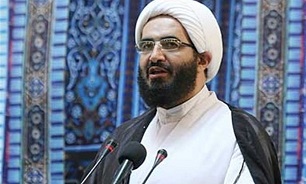 Addressing a large and fervent congregation of the people in Tehran on Friday, Hojjatoleslam Haj Ali Akbari said, “The foreign enemies, including the United States, tried to interfere in the country’s affairs under the guise of popular protests after failing to directly confront the Islamic Republic of Iran on the international stage.”

The senior cleric further noted that the power of global imperialism led by the United States is declining, describing their show of support for rioters during the recent unrest in Iran as a desperate move to which they resorted to after failing to achieve their goals.

In relevant remarks on Wednesday, Supreme Leader of the Islamic Revolution Ayatollah Seyed Ali Khamenei praised the Iranian people for their vigilance and rallies to support the Islamic Republic after the recent riots in Iran, stressing that they thwarted a dangerous plot against the country.

"I would like to express my heartfelt gratitude and appreciation to the great Iranian nation for their magnificent movement during recent days. The people proved again that they are powerful and great, and defeated the big conspiracy of the enemy with their presence on the scene," Ayatollah Khamenei said, addressing a large number of Iranian Basij (volunteer) forces in Tehran on the occasion of the National Week of Basij.

"The grave, extensive and very dangerous conspiracy that Global Arrogance and Zionism spent so much on and worked for so that they could cause this destruction, villainy, and murder in Iran at a crucial time was quashed by the presence of the people," he added.

Police and security forces entered the scene and performed their duty, but what the nation did during this week was more important than any other measure, he added, noting that the movement started in Tabriz and Zanjan, spread to all cities, villages, and a great movement took place in Tehran.

Ayatollah Khamenei underlined that the system of domination is against freedom, adding that "The biggest freedom is a nation’s freedom and independence, which they are against. They enter via colonialism, then via  neocolonialism, today using new methods, soft war, and if they can and find it necessary using military force without hesitation.”

The nation’s main enemies comprehend the meaning and message conveyed by the national drive, the Leader stated. “This past week truly witnessed the height of the Iranian nation’s glory and magnificence. We are grateful towards God and are thankful towards the dear people, too,” Ayatollah Khamenei noted.

The Leader said the hegemonic system and the US have expended all in their power since the Islamic Revolution to confront Iran’s Islamic establishment.

The establishment, however, has grown in power and strength every day and come to flaunt these qualities before the enemy’s eyes, Ayatollah Khamenei added.

The Leader warned that expansive and magnificent institutions such as Basij in Iran and its kindred organizations in some other countries were more likely to be targeted by the hegemonic system’s adversarial plots.

“Victory is guaranteed for the Iranian people, Basij, and the country’s revolutionary movement,” the Leader stated, citing the divine pledge of assistance to those following the divine path.