Merkel's Fate Rests with Disgruntled Members of Coalition Partner
TEHRAN (defapress) – A week after Angela Merkel’s own party survived a blistering leadership battle, it’s now her allied Social Democrats that threaten to blow up the governing coalition with the election of a new leader.
News ID: 79426 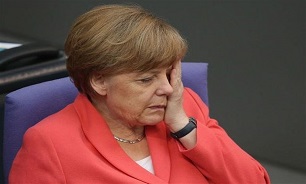 Pummeled by repeated electoral defeats, the SPD has struggled for some time over whether to abandon the coalition with Merkel’s Christian Democratic-led bloc or to limp on in the unloved alliance until elections scheduled for 2021 at the latest, Bloomberg reported.

The opposing factions face each other in an election campaign to lead the party, which comes to a close on Friday. The candidates representing the “remainers” are a duo made up of Finance Minister Olaf Scholz and Klara Geywitz. Siding with the “exiters” are Norbert Walter-Borjans, a former state finance chief and left-wing lawmaker Saskia Esken. The result of the vote will be announced Saturday evening and the winner confirmed at a party convention a week later.

The crises bedeviling Germany’s ruling parties coincides not only with Merkel’s final phase in office but also with the rise of far-right populists and environmentalist to rival them. Another bout of political uncertainty could hamper Germany’s response in a possible economic crisis as well as its presidency of the European Council in the second half of next year.

Scholz and Geywitz have argued that despite the pain of compromise, the party is achieving more from the cabinet bench than it would in opposition. Walter-Borjans and Esken, who favor increased spending and taxing the rich, have championed a restive party base that wants to return the party to its working-class roots.

Under the lead of the victorious tandem the party will formally evaluate its alliance with Merkel’s CDU at the Dec. 6-8 convention.

Both staying and leaving come with risks. Polling well below the 20.5% support it garnered in 2017, the SPD could see its parliamentary base shrink dramatically in a possible snap election. Sitting tight may simply lead to a further loss in support.

The SPD has 13%, half the support garnered by Merkel’s bloc and well behind the 22% for the Greens, according to a YouGov survey from Wednesday.

Rather than a straight vote on breaking up the coalition, party leaders may opt to set out conditions for staying, such as a departure from balanced-budget policies, an increased minimum wage, or more spending on social welfare. The CDU-led bloc could enter into a prolonged negotiating process or find itself unable to fulfill the SPD’s conditions.

Annegret Kramp-Karrenbauer, who temporarily defused critics seeking to sideline her, told party delegates in Leipzig last week that she would refuse to renegotiate the coalition agreement that the two factions completed in March 2018.

Should Walter-Borjans and Esken win, demands on Merkel could include a call to scrap fiscal discipline and impose a minimum wage of 12 euros ($13.20) -- almost surely red lines for Merkel’s camp, according to Manfred Guellner, the director at Berlin-based pollster Forsa.

“That would be unacceptable for the CDU and the grand coalition would sooner or later break apart,” Guellner said in an interview.

Depending on the details of the demands, the coalition could rumble on for weeks or months, even if some of the coalition members run out of patience.

“All day long the SPD asks itself ‘do I want all this here’,” Jens Spahn, the 39-year-old CDU health minister and conservative flag-bearer, said in Leipzig. “My simple expectation is that whoever leads the SPD after this convention, that they decide what they want.”