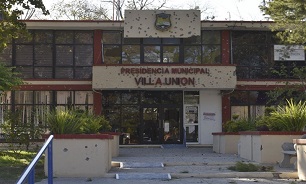 He said the armed group stormed the town of 3,000 residents in a convoy of trucks, attacking local government offices and prompting state and federal forces to intervene. Ten alleged members of the Cartel of the Northeast were killed in the response, AP reported.

Videos of the shootout posted on social media showed burned out vehicles and the facade of Villa Union’s municipal office riddled with bullets. Rapid gunfire could be heard in videos along with frantic people telling loved ones to stay indoors. A damaged black pickup truck with the C.D.N. of the Cartel del Noreste, or Cartel of the Northeast, written in white on its door is seen on the street.

Security forces will remain in the town for several days to restore a sense of calm, the governor said.