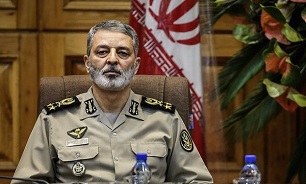 “Different aspects of enemies’ seditions have been discussed by experts; also the measures that the Islamic Republic of Iran’s armed forces should adopt in the face of these plots have been well defined,” Commander of Iran's Army Major General Abdolrahim Mousavi told Mehr News Agency on Monday.

“A framework has been defined to counter the plots of enemies and the required training have also been provided to the forces,” said the commander, adding that “armed forces are ready to give an appropriate response to any hostile action.”

Mousavi went on to say that the recent conspiracy organized by enemies was different from those in the past but it was foiled by the vigilance of the Islamic Revolution Leader Ayatollah Khamenei.

The Iranian government raised gasoline prices on November 15 in order to moderate the national consumption rate, which stands at 110 million liters per day, 40 million liters above the maximum daily domestic requirement.

The move prompted some peaceful protests, but riotous elements, taking advantage of the circumstances, quickly entered the scene, destroying public property and setting banks and gas stations ablaze. Authorities says some also used firearms and other weapons against protesters and security forces.