Judiciary Chief Calls for Compensating Losses Endured by Victims of Recent Riots
TEHRAN (defapress)- Iran's Judiciary Chief Ebrahim Rayeesi said on Monday that all who have endured human or material losses in the foreign-backed riots of the last month should receive compensation, reiterating that the branch will firmly support citizens to safeguard their rights.
News ID: 79456 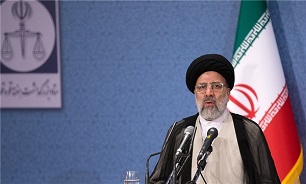 Addressing the Judiciary’s Supreme Council today, Rayeesi said the suffering could not be condoned “under any circumstances,” adding from the legal perspective, the injured parties certainly have a right to claim damages.

He urged that the country’s authorities, particularly the government, to pursue reparation of damages suffered by natural and legal entities during the violence.

The Judiciary, Rayeesi added, will do its share to ensure that due legal processes take their course in order to restore the rights of citizens. “Those who suffered should know that they will be supported by law.”

The protests were initially peaceful but became violent after riotous elements took advantage of the situation to wreak havoc, destroying public property, as well as setting banks and gas stations ablaze.

A number of people and security forces also lost their lives during the violence. There is no official tally on the number of casualties yet.

The Islamic Revolution Guards Corps (IRGC) has said more than 100 of the riots ringleaders have been rounded up so far.

On Wednesday, the director of the counter-espionage department of the Iranian Intelligence Ministry said security forces had arrested eight people linked to the US Central Intelligence Agency (CIA) during the recent riots.

Rayeesi said a number of anarchists and riotous elements had been handed over to judiciary institutions. “The people will soon be notified about the due processes" undertaken regarding the detainees, he added.

The Judiciary chief said the rioters with overseas links, who acted on directives from foreign handlers, would also be dealt with.

“People should know that what is required by justice will be executed and any criminal activities will be dealt with.”

Deputy commander of the IRGC Sarallah Base's Baqer Sadat Hosseini also said Monday anti-revolutionary forces were on the lookout for every opportunity to target the Islamic Revolution.

“They are trying to achieve their specific goals, which are overthrowing Iran’s Islamic establishment and creating insecurity and instability in the country under the guise of popular demands,” he noted.

However, the Iranian nation has invariably frustrated the enemies through its presence and effectively supported the establishment throughout the 40 years since the Revolution, Sadat Hosseini added.

Last month, IRGC Lieutenant Commander Brigadier General Ali Fadavi said that the US was disappointed that its perpetrated violent riots in Iran did not last more than 48 hours, adding that reports from all four corners of the country indicate that peace and calm has been restored much to Washington’s chagrin.

"Based on information we have received, the Americans have gone mad that the riots were over within 48 hours and are disappointed that there is no more disorder in Iran," Fadavi added.

However, Fadavi said that in numerous calls with other IRGC officials in the country no further riot attempts had been reported.

"Attacking homes, shops, hospitals, banks and gas stations is a malicious act which is not an act of protest nor rioting, but an act of thievery," Fadavi said.

"This is the difference between protest and disorder," he said.

The IRGC deputy commander added that peaceful protests were "natural" given the recent price hike and that the government has to adopt additional measures to reduce pressure on the general population.

Fadavi added, however, "The fact that the malicious actors of the world are targeting Iran in issues that are by no means related to them is a matter to note."

Deputy Head of Iran's Basij volunteer forces Brigadier General Salar Abnoosh said in November "a full-fledged war" had been meant to be waged against the country, only to be quelled early on.

Abnoosh added that interrogations of arrested rioters had revealed that a "coalition of evil" made up of "Zionists, America and Saudi Arabia" had joined forces to organize destructive riots from abroad.

"But their schemes were neutralized," he said, adding that the riots ceased to continue despite the fact that countries such as Saudi Arabia had spent many resources and had provided much media coverage in order to instigate disorder.

Addressing recent riots during a speech, Iran's Judiciary Chief Ebrahim Rayeesi said those "who have abused the concerns and troubles of the people in order to create disorder and insecurity" will face severe consequences.

"The Islamic Republic of Iran is known as the safest country in the region due to the sacrifices of our martyrs and our wounded," he said.

"We will never allow the smallest breach in the security of our people," he added.

Riots by a small number who had taken advantage of legitimate public protests against the government's gas price hike plan in Iran were directed at sowing chaos through targeted attacks on public and private properties, forcing law enforcement to step in to stop saboteurs.

Early estimates of an intelligence body showed that a sum of nearly 87,000 protesters and rioters had taken part in protest rallies and gatherings since Friday night, mostly (over 93%) men. A large number of protesters had only been present in the gathering centers and avoided joining the rioters in sabotage attacks on public and private properties.

"The identical methods of the main core of violent rioters discloses that they are fully trained individuals who have been prepared and looking forward for the situation to rise, unlike most people who have been taken off guard by the sudden hike in gas price," the report said.

The report showed that gatherings have been comprised of 50 to 1,500 people held in 100 regions of the country out of a number of 1,080 major towns and cities. The report says violent raids and damage inflicted on properties has been larger than what happened in February 2018 unrests.

Most cases of damage to properties had happened in Khuzestan, Tehran, Fars and Kerman provinces. The report says most casualties have resulted from armed outlaws' attacks on oil storage and military centers, adding that a number of police and popular forces have been martyred in these attacks.

Nearly 1,000 people were arrested across the country while over 100 banks and 57 big stores were set on fire or plundered in just one province.

The Iranian intelligence ministry announced in a statement on November 17 that it had identified several rioters who misused the recent protest rallies against the gasoline price hikes to destroy public and private properties.

"The main culprits behind the riots in the past two days have been identified and proper measures are being adopted and the honorable nation will be informed about its result later," the statement said.

Hundreds of thousands of people in the capital city of Tehran poured to the streets early this week to show allegiance to Supreme Leader and the Islamic Republic and support for the country's security and might.

They also carried the Iranian flags and placards with Supreme Leader of the Islamic Revolution Ayatollah Seyed Ali Khamenei's images and remarks.

The ralliers also voiced their opposition to the hike in gasoline prices and other goods in Iran, but meantime, voiced hatred for the rioters who misused the recent protests to set ablaze the public and private properties and loot the big stores.

In similar rallies last week, tens of thousands of people in Northern, Western and Southern Iran demonstrated to show allegiance to the Islamic Republic and Supreme Leader after the recent riots.

The protestors also carried placards which called on the government to show more attention to people's welfare and living conditions and urged the judiciary to sue and seriously punish those who distorted security and tranquility of people in the recent riots.

Similar demonstrations have been underway throughout the country in the past few days.