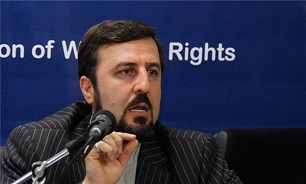 Qaribabadi highlighted on Monday the IAEA’s obligation to maintain its independent, professional and impartial disposition with regard to facing critical issues, saying the UN nuclear watchdog should avoid forceful and unilateral measures.

“Iran believes that peaceful use of nuclear energy should not be hindered through unilateral and illegally forceful measures, nor be conditioned to any arbitrary and inadmissible preconditions on behalf of other countries,” Qaribabadi said.

Pointing to the notion that observation and verification of Iran’s nuclear program activities under UN Security Council Resolution 2231 was part of the IAEA’s basic mission at the present time, Qaribabadi said Iran was an “important partner” for the agency.

“Beyond a shadow of a doubt, the existence of the three pillars of the nuclear Non-Proliferation Treaty (NPT) and also the credibility of the IAEA is by and large predicated upon commitment to these principles,” the Iranian diplomat added.

On October 29, the IAEA’s 35-nation Board of Governors picked Grossi, a 58-year-old Argentinean diplomat, to become the agency’s next chief, succeeding Yukiya Amano, who died in office in July.

After his election, Grossi, who had the early support of Brazil and the United States, pledged to act independently and neutrally on issues including Iran.

“I will do my job and I think my job is to implement the mandate in a manner which is independent, fair, and neutral,” he said.

The new IAEA director general is facing challenges such as the 2015 Iran nuclear deal, whose fate remains in doubt after Washington's unilateral withdrawal from the multilateral accord and Europe’s failure to fulfill its end of the bargain.

The US under President Donald Trump and Israel — a staunch opponent of diplomacy with Iran — have repeatedly attempted to put pressure on the IAEA to kill the JCPOA.

Prior to Grossi’s appointment, reports said the US had been meddling in favor of Argentina’s contender.

Late in October, Qaribabadi had called on the new director-general of the International Atomic Energy Agency to maintain independence and impartiality in the IAEA.

Qaribabadi said that Iran has always stressed the independence and impartiality of the entity, as it expects the approach to be preserved under any situation.

Iran's policy and stance have always been based on the principles, he said, noting that observing the same by the IAEA will receive positive and interactive approach from Tehran.

Since the IAEA is tasked with monitoring and verifying Iran's JCPOA commitments, the new director-general should like its predecessor fulfill his role in preserving JCPOA properly, Qaribabadi said.

In late July, Amano passed away, necessitating the election of a new head for the organization.