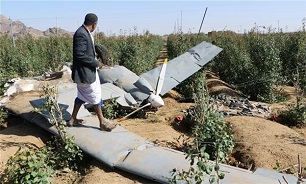 Spokesman for Yemeni Armed Forces Brigadier General Yahya Saree wrote in posts published on his Twitter page that Yemeni forces and their allies shot down a drone over Jizan region, located Southwest of the capital Riyadh, and another over Asir region, Yemeni News reported.

He added that Yemeni army forces and Popular Committees fighters targeted the unmanned aerial vehicles with proper missiles as they were carrying out “reconnaissance and hostile acts”.