Zarif Hits Back at E3 for UN Letter on Iran’s Missile Program
TEHRAN (defapress) – Iran’s foreign minister denounced the European parties to the 2015 nuclear deal for sending a letter to the UN chief in which they have accused Iran of ignoring a UN Security Council resolution, as a desperate measure to cover up their failure to honor the JCPOA.
News ID: 79493 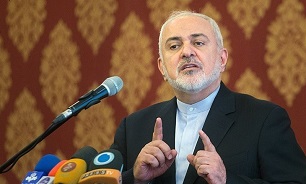 In a post on his Twitter account on Thursday, Mohammad Javad Zarif said, “Latest E3 letter to UNSG on missiles is a desperate falsehood to cover up their miserable incompetence in fulfilling bare minimum of their own JCPOA obligations.”

“If E3 want a modicum of global credibility, they can begin by exerting sovereignty rather than bowing to US bullying,” the top Iranian diplomat added.

His post came after the three European parties to the Joint Comprehensive Plan of Action (JCPOA), namely France, Germany and the UK, sent a letter to UN Secretary-General Antonio Guterres, alleging that “Iran’s developments of nuclear-capable ballistic missiles” go against the UN Security Council Resolution 2231.

Ambassadors from the three European nations have also called on Guterres to inform the Security Council in his next report that Iran’s ballistic missile activity is “inconsistent” with the call in the resolution endorsing the JCPOA.