Lavrov:
Russia to Never Deploy Medium-Range Missiles in Europe Unless US Does
TEHRAN (defapress)- Moscow will never be the first to deploy medium-range missiles in Europe after the Intermediate-Range Nuclear Forces (INF) Treaty ended but will respond in kind if the United States takes this step, Russian Foreign Minister Sergei Lavrov said Friday.
News ID: 79506 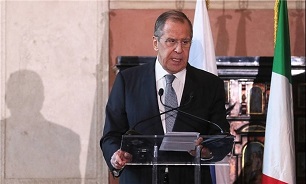 "We will never be the first to deploy this kind of armaments in any region unless it agrees to host similar US-made weapons. This position has not changed," he said after a meeting with Italian Foreign Minister Luigi di Maio in Rome, according to RIA Novosti.

Lavrov lamented NATO’s refusal to back a moratorium proposed by Russian President Vladimir Putin on deploying short- and medium-range missiles in Europe.

"If practical steps are taken to build and deploy [such weapons in Europe] we will respond in kind but we will not be the first ones. Americans said they were not going to create a missile of this class but they have already tested one," he added.

In September, the Russian president sent a proposal to the leaders of several countries, NATO members among them, to introduce a moratorium on deploying short- and intermediate-range missiles banned by the INF Treaty in Europe and other regions.

A month later, Russian Ambassador to the US Anatoly Antonov stressed that if INF-covered missiles are deployed in Europe, this will force Moscow to retaliate.