Iran Raps US, E3 for Turning Blind Eye to Tel Aviv’s Nuke Test
TEHRAN (defapress)- Iranian Foreign Minister Mohammad Javad Zarif lashed out at US and the European trio of the UK, France, and Germany for following a duplicitous foreign policy and turning deaf ear to Israeli nuclear arsenal, as the only owner of such weapons in the region, and at the same time pressing Tehran for its conventional defensive missiles.
News ID: 79507 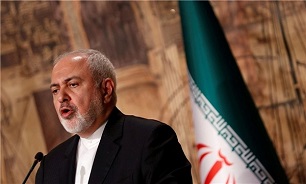 “E3 [UK, France, and Germany] and US never complain about the only nuclear arsenal in West Asia – armed with missiles actually DESIGNED to be capable of carrying nukes,” he tweeted in reference to Tel Aviv which is the only nuclear armed country of the Middle East.

Nevertheless, these four states have “fits of apoplexy over our conventional and defensive ones,” Zarif added.

The Israeli military has tested a propulsion system used for carrying nuclear-capable and other missiles, with the Israeli media billing the display as “a show of force aimed at Iran”. The test was carried out at Palmachim Airbase South of Tel Aviv on Friday, Israeli television channel i24 News reported.

The E3 have remained silent over such developments, while two days earlier, ambassadors from the three European nations urged UN Secretary-General Antonio Guterres in a letter to inform the council in his next report that Iran’s ballistic missile activity is “inconsistent” with the call in a council resolution endorsing the 2015 nuclear deal with Iran.

The trio of Britain, France and Germany make up the three European signatories of the nuclear deal, officially known as the Joint Comprehensive Plan of Action (JCPOA).

This is while Iran has repeatedly announced that none of its ballistic missiles are designed to be capable of delivering nuclear weapons, saying that paragraph 3 of annex B to Resolution 2231 (which endorses a nuclear deal signed between Iran and major world powers) does not limit, in any way, Iran’s activities regarding the conventional ballistic missiles.

Earlier on Friday, Zarif posted a tweet reminding the European signatories of the nuclear deal that Tehran’s ballistic missiles are under no ban under the nuclear deal and UN Resolution 2231, adding that US special representative for Iran Brian Hook has also admitted the fact.

“Brian Hook has given our E3 JCPOA partners a timely reminder, openly admitting that missile testing is NOT prohibited in Security Council Resolution 2231,” tweeted Zarif.

In a tweet on Thursday, Zarif wrote, “Latest E3 letter to UNSG on missiles is a desperate falsehood to cover up their miserable incompetence in fulfilling bare minimum of their own JCPOA obligations."

"If E3 want a modicum of global credibility, they can begin by exerting sovereignty rather than bowing to US bullying," Zarif stressed.

The Iranian diplomat capped off his tweet with an image of two UNSC resolutions, with the Resolution 1929 on banning Iran's ballistic activities stamped as 'terminated', and Resolution 2231, still endorsed, outlining the termination of Resolution 1929 in 2010, under Article 41 of UN Charter.

Iran has several times stressed that its missile program is not included in the resolution 2231.