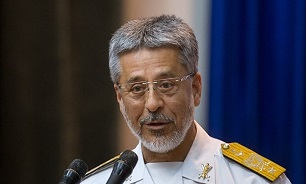 Rear Admiral Sayyari made the remarks on Saturday, addressing a ceremony to deliver 'Rear Admiral Bayandor Destroyer' to the third Naval zone in the Southeastern waters of Iran.

He underlined that the Iranian fleet of warships have provided security to 10,000 ships and escorted nearly 5,000 oil tankers.

Rear Admiral Sayyari noted that the home-made Destroyer, Dena, and Submarines Fateh and Tareq will join the Navy soon.

"The enemy knows that we are powerful and do not compromise on safeguarding our water borders," he stressed.

In relevant remarks in August, Rear Admiral Sayyari said that his country has deployed its most advanced destroyer Sahand, along with two other vessels, to the Gulf of Aden to protect Iranian-flagged ships in the high seas.

Iran has deployed its most advanced destroyer Sahand to the Gulf of Aden in a mission aimed at providing security for Iranian vessels in the high seas.

Rear Admiral Sayyari said that the warship is being accompanied by a logistical vessel and the Kharg helicopter carrier on the voyage.

The flotilla was the 63rd Iranian naval group to be dispatched on overseas operation, he added, saying the group will be escorting Iranian ships in the Sea of Oman and the Persian Gulf.

Iranian Navy Commander Rear Admiral Hossein Khanzadi said late in November that the Navy had dispatched its 64th flotilla to the Gulf of Aden to safeguard the country's interests at the high seas.