Iran Navy chief:
Foreign troops only sow insecurity in region
TEHRAN (defapress) – The top commander of the Iranian Navy warned that foreign military presence in the Persian Gulf only brings insecurity and instability to the region.
News ID: 79536 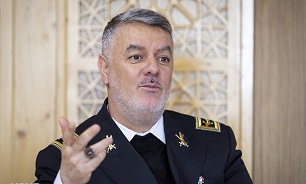 “Some western countries and arrogant powers have been trying to establish a so-called coalition under the pretext of safeguarding the Strait of Hormuz, whereas they only aim at securing their illegal footprint in the region,” Iran’s Navy Chief Rear Admiral Hossein Khanzadi said on Tuesday.

“This will only foment insecurity [in the region],” he added.

The top commander, who is visiting Pakistan to discuss ways of boosting naval cooperation with the neighboring state, added that booting foreign troops from the region is the only way to preserve the peace and security in the region.

“I have had negotiations with my Pakistani counterpart in this regard, and we had the consensus that the region does not need any non-regional force to maintain its security.”

He reiterated the Islamic Republic’s stance that the responsibility rests with Persian Gulf littoral states to ensure the water body’s security.

The United States has been attempting to persuade its allies to join a coalition with the declared aim of providing “security” for commercial shipping in the Strait of Hormuz, through which about a fifth of all oil consumed globally passes.

The US claims that Tehran has played a role in two mysterious attacks on oil tankers in the Sea of Oman in May and June, which Iran has categorically rejected as unfounded.