IRGC chief:
Iran to reverse trend of US sanctions
TEHRAN (defapress)– IRGC Chief Major General Hossein Salami said on Wednesday that “we are trying to turn ‘economic resistance’ into ‘resistance economy’ to reverse the trend of the US sanctions."
News ID: 79551 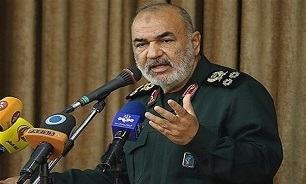 “Foreign companies’ leaving Iran gave us a chance to indigenize technology and now they [enemies] see our independence,” he said.

He added that Khatam‑al Anbiya Construction Headquarters is not an economic and money-making body but it is using all the available capacities to support Iran’s economy.

The IRGC chief referred to the wide range of psychological attacks carried out by enemies against the Iranian nation, noting that “the enemy seeks to make Iran a reliant country by barring knowledge and conducting psychological operations and warfare.”

Salami also said that “we have averted interference and penetration of enemies and we want to seal their tongues, too.”