military adviser to Leader:
US to soon flee from West Asia
TEHRAN (defapress) – Major General Yahya Rahim Safavi, a top military aide to the Leader of the Islamic Revolution, said that the American forces will soon have to escape the West Asia region.
News ID: 79559 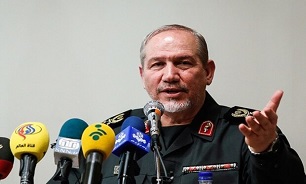 Speaking in a local ceremony in Tehran late on Wednesday, Safavi praised the Islamic Revolution Guards Corps (IRGC) Ground Force as an “honorable” force, which has a serious presence on the scene.

“The IRGC Ground Force... has promoted the grandeur of the Iranian nation in the face of mercenary forces of the US and the Zionist regime,” he said.

“Our enemies should be aware that our nation is an invincible nation and the leadership of the Islamic Republic is a strong and wise leader,” the top general stated.

“I can assure you that America will soon escape the West Asian region…,” he added.