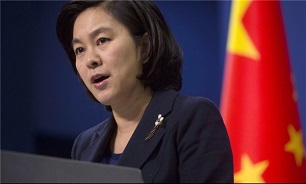 Hua added that Washington's decision to leave the INF had been motivated only by its desire to secure military supremacy through developing advanced missile technologies.

"The US' twisting [of the facts] about Russia's violations of the agreement and China's missile threat is nothing more than a clumsy performance aimed at deceiving others," Hua noted.

Esper praised on Thursday the successful test of the INF-banned ground-based missile, noting that it had taken less than nine months, instead of the usual two years, to go from concept to launch.

According to Esper, work on the missile began after Washington withdrew from the INF.

The INF accord, signed between the US and Russia in 1987, was terminated on 2 August at the initiative of the Trump administration, after Washington formally suspended its INF obligations six months earlier.

Both countries have repeatedly accused each other of violating the deal which banned any ground-launched ballistic and cruise missiles with ranges of 500 to 5,500 kilometres (310 to 3,417 miles).