Larijani:
Accepting ceasefire in Yemen a wise move
TEHRAN (defapress) – Iranian Parliament Speaker Ali Larijani said choosing dialog to settle the conflict in Yemeni is a good measure as long as the talks lead to an actual ceasefire in effect.
News ID: 79573 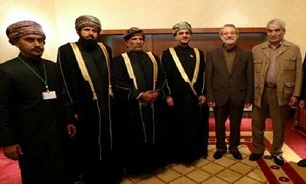 Larijani made the remarks in a meeting with Omani Deputy Parliament Speaker Abdullah Al Amri on the sidelines of 12th plenary meeting of the Asian Parliamentary Assembly (APA) in Antalya, Turkey.

Noting Oman’s approach toward the crisis in Yemen, Larijani said “your role was wise and rational. We hope that talks on Yemen would lead to a practical measure and an actual ceasefire.”

He further stressed that accepting ceasefire in Yemen is a “logical path.”

Saudi Arabia and a number of its regional allies launched a devastating campaign against Yemen in March 2015, which has claimed more than 100,000 lives and heavily damaged the country’s infrastructure over the past four and a half years.

The Omani official, for his part, said his country is informed on some talks taking place on Yemen, voicing readiness to increase efforts to find a solution to end the war in the crisis-hit and impoverished Arab country.

“The situation in Yemen is improving. Efforts to settle the conflict have been formed in the most appropriate way possible,” he reassured.

Elsewhere, he touched upon the project of gas transfer from Iran to Oman via sea, saying “there is a strong resolve to carry out the project. The only problems that remain are technical and financial, which can be solved by relevant ministers of both countries.”